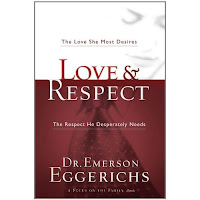 Synopsis: Discover the Single Greatest Secret to a Successful Marriage. Psychological studies affirm it, and the Bible has been saying it for ages. Cracking the communication code between husband and wife involves understanding one thing: that unconditional respect is as powerful for him as unconditional love is for her. It's the secret to marriage that every couple seeks, and yet few couples ever find. Today, you and your mate can start fresh with the ground-breaking guidance that Dr. Emerson Eggerichs provides in this book. His revolutionary message, featured on Focus on the Family, is for anyone: in marital crisis...wanting to stay happily married...who's feeling lonely. It's for engaged couples...victims of affairs...pastors and counselors seeking material that can save a marriage. Using Dr. Eggerich's breakthrough techniques, couples nationwide are achieving a brand-new level of intimacy and learning how to: - stop the Crazy Cycle of conflict - initiate the Energizing Cycle of change - enjoy the Rewarded Cycle of new passion.

This book was recommended by one of my instructors at Bible school, so I was especially interested when it was available for review as part of the Booksneeze blog program through Thomas Nelson. It definitely lived up to the recommendation. It is a wonderful book for those married or considering marriage. The principles from this book are practical and applicable.
Posted by Elizabeth Ridgemont at 4:26 PM 1 comment:

The Fire in Ember

Synopsis: "John Timmons' life is planned and orderly. He cares for his mother and four younger brothers, and their future depends on him to keep their Colorado ranch profitable. Ember Farrar (Bert) has run away from her lawbreaking family in search of a new life. But, when she attempts to return a horse that her brother had stolen, ranch hands believe she is a thief and a boy and they plan to hang her. John, who is also a deputy marshal, breaks up the hanging. After paying for the stolen horse, he takes the boy home to work off the debt. Later he learns Bert is a girl who refuses to tell him who she is and why she possessed a stolen horse. When ranchers report stolen cattle, Bert is a natural suspect. John is touched by Bert's sweet spirit and natural gift of music. Surely she's not a cattle thief. Bert fears for their lives when she is forced to either help her brothers steal or put the Timmons in danger. When John thinks Bert has betrayed him, he ignores God and turns revengeful. Will John learn who Bert truly is? Will their lives ever return back to normal?"

I did not enjoy "The Fire in Ember," by Diann Mills. It was boring and did not hold my interest, I had to put in a lot of effort just to finish it. The plot of a girl trying to escape her law-breaking family and right their wrongs, meets a man who was wronged by them, falls in love with said man, said man finds out about family ties and must decide if he can trust her, yada yada yada... Also, Bert's "conversion" was hardly believable and it seemed the author implied that works and repentance were necessary for salvation. The characters were one dimensional and I could not relate to them at all. I am glad I did not pay money for this book. I received it for review as part of the Zondervan Publishers blog program.

Posted by Elizabeth Ridgemont at 4:01 PM No comments:

Attack at the Arena 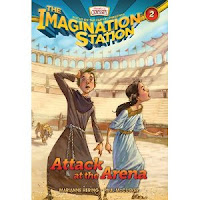 "Attack at the Arena," by Marianne Hering and Paul McCusker is the second book in the Imagination Station Series, written for ages 7 and up. The story follows Patrick and Beth, cousins, who take a journey to Ancient Rome via the Imagination Station. Once there, they meet Telemachus, a monk. The adventure introduces kids to ancient history and Biblical concepts. My sister, age 8, was enthralled with the book and read it in two days. The book was almost identical to the "Adventures in Odyssey" episode, "Telemachus." These books are great alternative to the sci-fi, fantasy, and vampire novels being pushed on kids today.

This book was given to me for free for review by Tyndale Publishers.
Posted by Elizabeth Ridgemont at 3:49 PM No comments: 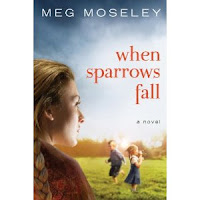 Synopsis: "A widow and mother of six, Miranda Hanford leads a quiet, private life. When the pastor of her close-knit church announces his plans to move the entire congregation to another state, Miranda jumps at the opportunity to dissolve ties with Mason Chandler and his controlling method of ruling his flock. But then Mason threatens to unearth secrets from her past, and Miranda feels trapped, terrified she’ll be unable to protect her children.

College professor Jack Hanford is more than surprised when he gets a call from his estranged sister-in-law’s oldest son, Timothy, informing him that Miranda has taken a serious fall and he has been named legal guardian of her children while she recovers. Quickly charmed by Miranda’s children, Jack brings some much-needed life into the sheltered household. But his constant challenging of the family’s conservative lifestyle makes the recovering mother uneasy and defensive—despite Jack’s unnerving appeal.

As Jack tries to make sense of the mysterious Miranda and the secrets she holds so tightly, Mason’s pressure on her increases. With her emotions stirring and freedom calling, can Miranda find a way to unshackle her family without losing everything?"

Lately I have been enjoying Christian fiction less and less. However, "When Sparrows Fall," was a well-written and entertaining read. The characters were realistic, not cookie-cuttered like so much of Christian fiction. The plot kept my attention. I enjoyed the references to home schooling, since I was home schooled, and there was not a bunch of cliched theological references. I would definitely recommend this book.

This book was given to me free for review by Waterbrook Multnomah publishers through the Blogging for Books program.

Posted by Elizabeth Ridgemont at 3:33 PM No comments:

“I have an almost complete disregard of precedent, and a faith in the possibility of something better. It irritates me to be told how things have always been done. I defy the tyranny of precedent. I go for anything new that might improve the past."
-Clara Barton

Far better is it to dare mighty things, to win glorius triumphs, even though checkered by failure... than to rank with those poor spirits who neither enjoy nor suffer much, because they live in a gray twilight that knows not victory nor defeat.
-Theodore Roosevelt

Education without values, as useful as it is, seems rather to make man a more clever devil.
-C. S. Lewis

A lie gets halfway around the world before the truth has a chance to get its pants on.
Winston Churchill

I am always ready to learn although I do not always like being taught.
Winston Churchill

Men occasionally stumble over the truth, but most of them pick themselves up and hurry off as if nothing had happened.
Winston Churchill

Nearly all men can stand adversity, but if you want to test a man's character, give him power.
Abraham Lincoln

Character cannot be developed in ease and quiet. Only through experience of trial and suffering can the soul be strengthened, ambition inspired, and success achieved.
Helen Keller

There is no mistaking a real book when one meets it. It is like falling in love.
Christopher Morley

I declare after all there is no enjoyment like reading! How much sooner one tires of anything than of a book! When I have a house of my own, I shall be miserable if I have not an excellent library.
Jane Austen

Elizabeth Ridgemont
Hi! I am a nurse who loves Jesus, theology, reading, and new ideas. I'm an old soul.